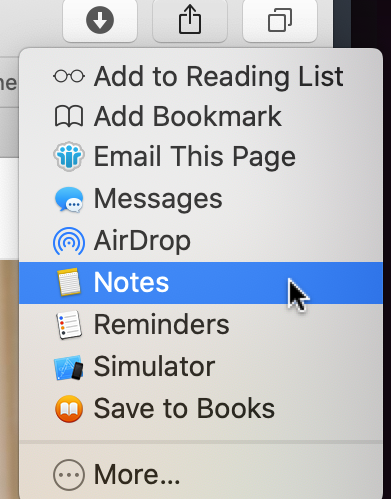 I’ve been using the Firefox browser for a long time – because it was my goto browser back in the early 2000’s, and I’ve liked their approach to handling security, pop up blocking and then addition of tools such as the screenshot grabber from the address bar. Having started out using it on Windows, I then progressed to using it as my default browser when I migrated to an Apple Mac back in 2011.

Alongside Firefox, I’ve been using Apple Notes and given its the free app that ships with MacOS / iOS, it works really well and over the years the functionality has gradually increased with each new release 🙂 One of my common use cases is to store either a web url or a web page in a note, then annotate / add additional text etc. Grabbing a screen in Firefox, switching to Apple Notes and pasting into a note was becoming a productivity blocker.

Having resisted the need for Safari, I have finally succumbed to its charms. With the planned enhancements described in the WWDC 2020 keynote that showed how its finally becoming the #1 browser on Mac (in my opinion), with features such as a translation tool, home page customisation, tabbed browsing, tracking protection, face id support and a focus on extensions, I have moved away from Firefox, which has also had the major benefit of fixing my main issue with copy/paste of web content…

One of the features I now use is the “Share” menu, it gives me a quick / easy way to send web content directly to a note :-

Whilst I’ve been aware of the Share menu for years, as somebody who has used a multitude of different apps for note taking, managing reminders, storing web pages to read later etc, I’ve just ignored its power 😦 For me, now having moved to Safari has improved my overall productivity across my Apple devices – the share menu has come to the rescue… and I can’t wait to get started with the new release of Safari later this year.

Read My Blog In Your Language